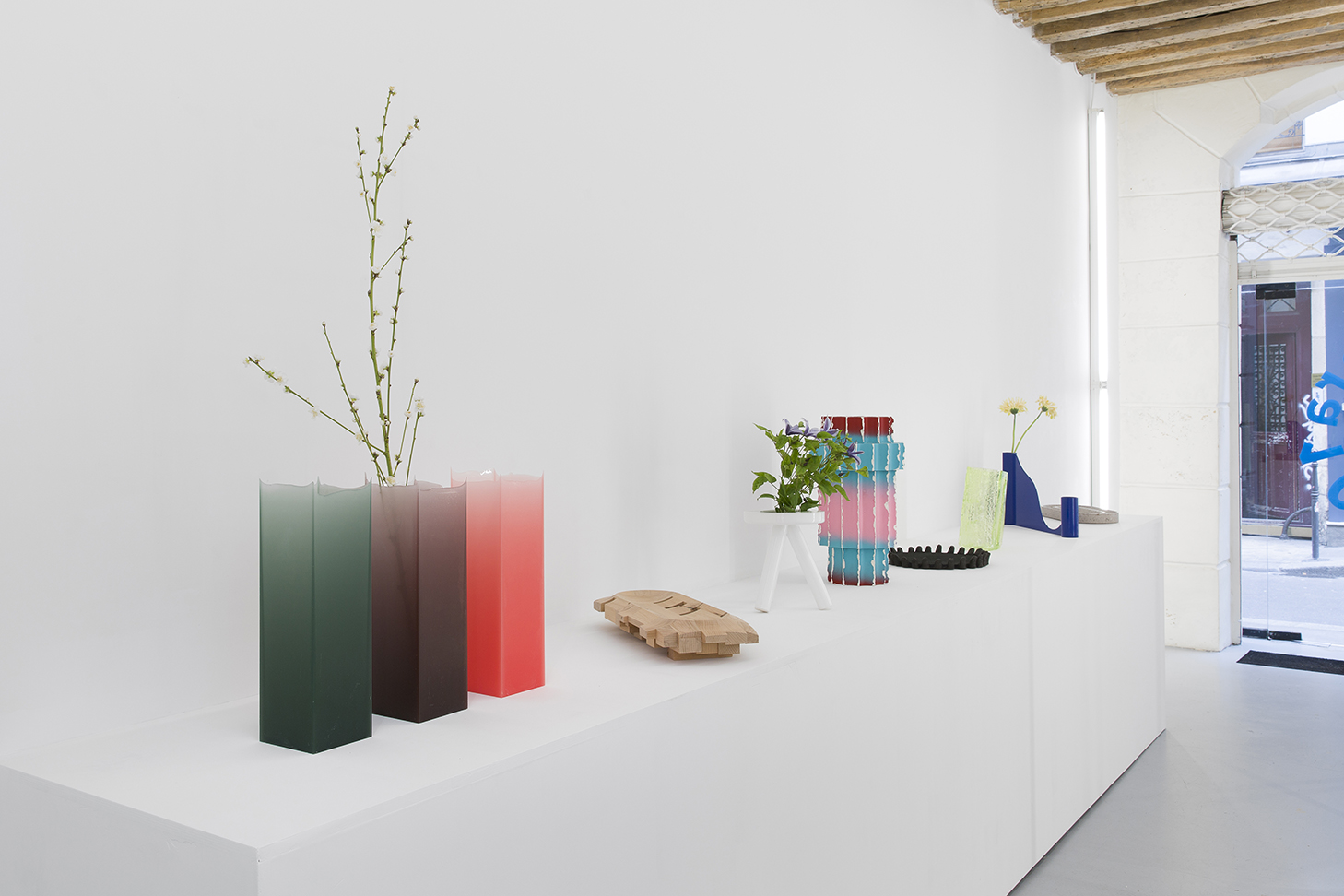 A few days ago, on March 20, the first day of spring, we were to inaugurate Primavera1043, the exhibition of the first 14 objects from the eponymous collection which, we hope, is just beginning. The sanitary conditions decided otherwise. We are therefore opening the exhibition online, mainly on Instagram, posting one object a day, in the hope of opening the gallery very quickly. In the meantime, the price list is available on request, as well as studio photos, and all objects can travel, alone or not.

In 2017 we held an exhibition ‘Flowers and Fruit’ bringing together over 50 vases and fruit bowls created between the ‘80s and the 2000s. After considering a sequel, we wondered whether it would not be more appealing to organise a similar exhibition but one that consisted uniquely of contemporary productions exclusive to A1043. So, a few months ago we contacted designers to propose the idea of producing, with simple techniques, an object that could be a vase or a fruit bowl and then manufacture a maximum of 10 numbered and signed copies.

The idea behind the collection is simple. By commissioning a vase or a fruit bowl, we are commissioning an object that will easily find its place in any interior. We are also commissioning an object that is linked to pleasure. The pleasure of seeing, discerning, smelling and tasting flowers and fruit. Unlike other objects such as chairs or lights, which have a very obvious use and relationship to the body, vases and fruit bowls constantly toy with the status of works of art. How many vases and fruit bowls sit on tables and furniture without ever seeing a flower or fruit, just like a sculpture?

By commissioning simple but strong objects, we wanted to put creativity back at the centre of our concerns. No posturing, no gratuitous effects, no desire to stick to a decorative, eco or material trend, but research into how to invent an object with sometimes very simple means

We are all familiar with Julien Carretero’s Drag2 collection. For Primavera1043 he has produced a whole new collection of vases in plaster of Paris with a combination of finesse and brutality. Pierre Castignola and Diego Faivre share a studio in Eindhoven. They were a step away from sharing production, which A1043 encouraged. The Mala de Curro Claret bowl which was produced in a gold version specially for our exhibition Economy now belongs to our new collection. It has a rightful place with its radicality and poetry. The concept of fullness and emptiness is common with Henri Frachon. For Primavera1043, he produced new work on duality. Matéo Garcia likes flowers. We know this and here is the proof with a metal vase bordering design and sculpture. We have been working for some time with Lucas Maassen. When we go into production with him we are always surprised by the result, and it is rarely the one we envisaged. We asked Lucas Maassen for a vase or a fruit bowl, but we have ended up with a Yahtzee board, and we are delighted with it! Julien Manaira made a name for himself with a collection of resin furniture. He didn’t think he would continue this collection, which he considered complete, so we asked him to enrich it by adding vases. A true work on light. As previously announced we will be opening a solo exhibition by Sho Ota in a few months. Of course, he was also invited to participate in Primavera1043, with a wooden fruit bowl in keeping with his work from the Surfaced series. Rikkert Paauw, who is adept at urban recycling, expressed his desire to work with glass on this occasion. We, therefore, found him a production site, the Centre International d’Art Verrier de Meisenthal. True to his need for experimentation, Rikkert Paauw made a series of 10 vases, all of them unique. Sometimes we cannot see what is before our very eyes. It is the role of designers to open our eyes With Geoffrey Pauchard the well-known shape of a shepherd’s stool becomes a three-legged vase. Quite impressively efficient. For some time now, Réjean Peytavin has been producing a beautiful series of vases entitled Hylomorphoses which belong as much to contemporary art as to the decorative arts. In response to our invitation, Réjean Peytavin produced a set of china in Limoges. Lenny Stöpp graces A1043 with a beautiful work based on an ancestral technique, that of circular dragging. Made of acrylic resin, the object produced is both a sculpture and a fully functional fruit bowl. Superpoly is all about movement. Bright colours, colourful contrasts, tubes which sway – the fruit bowl series for A1043 is true to this. Crude and delicate at the same time. A beautiful play of ambivalence. As for Tim Teven, in keeping with his research into the exploitation of residual from recycling paper, he has designed two very beautiful and surprisingly simple fruit bowls.

14 designers, some of whom have produced 10 unique pieces, in total an exhibition of some forty objects to discover in celebration of spring.